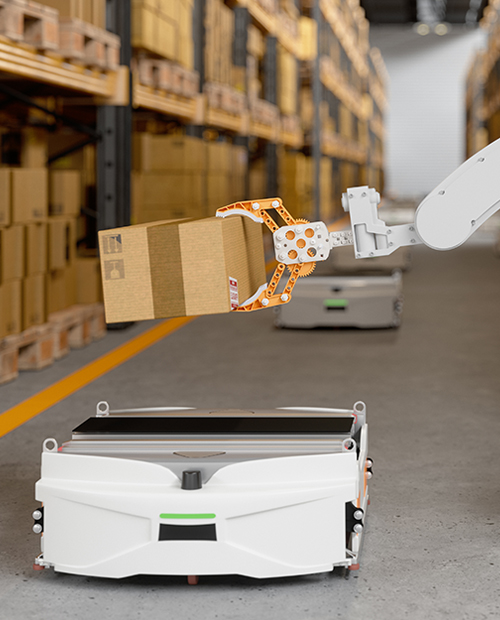 As a certified solution provider, FasThink guides and harmonises the integration of Mobile Robots within the Industry 4.0 model for the ERP, MES, MOM, WMS management systems.
The Connect Orchestrator platform in the “MRC” version, developed by FasThink R&D specifically for the integration and orchestration of Mobile Robots, AGVs and Collaborative Robots, is fully capable of handling a range of technologies, such as proprietary Pick2Light and e-Kanban sensor systems which are usually synchronised in a Manufacturing & Logistics environment, for example with the MRC (Mobile Robot Control) module.
FasThink chose the AMR Autonomous Mobile Robots for this particular application as they represent a breakthrough in the optimisation of manufacturing and logistics activities. Integrated with FasThink’s proprietary Pick2Light and e-Kanban sensor systems, they allow to increase productivity, eliminate errors and improve material traceability, while allowing staff to focus on more complex tasks.
In addition, unlike traditional AGVs, AMR mobile robots “navigate” by using existing system functionality, without the need for costly modifications. Ideal for SMEs.

Designed to meet the industry’s Next Gen requirements, the interaction of Connect Orchestrator MRC, FasThink Pick2Light and e-Kanban proprietary systems with AMR Mobile Robots opens up a new front for SMEs, enabling them to finally see people and machines interacting in a modern, collaborative and safe working environment.

The latest generation of AMR Mobile Robots features vehicles specially designed to move autonomously and reach their indicated destination, avoiding any obstacles they encounter while simultaneously re-planning their route.
AMR Mobile Robots are able to recalculate their route via special sensors, laser scanners or cameras that detect the surrounding planimetry and map the environment in which they operate.
The device is able to move freely thanks to the sensors and digital maps managed by the MRC controller. In most cases, the detection of relevant points on the map is used in combination with the odometry of the robot generated via the use of encoders on the wheels and a series of gyroscopes and accelerometers fitted to the robot itself.
AMR Mobile Robots can work in the presence of moving obstacles, such as production workers, favouring positive human-machine collaboration.

The functionality of AGVs is very similar to that of AMR Mobile Robots, although they operate in a completely different manner. Unlike mobile robots, they navigate by using existing infrastructure such as reflectors, magnetic strips and other means.
AGVs are widespread, but they require special integration and harmonisation with the information systems in use and the existing infrastructure of the environment in which they operate.
In this regard, FasThink – with its proprietary Connect Orchestrator MRC platform – efficiently integrates and harmonises AGV technology in Manufacturing and Logistics departments.